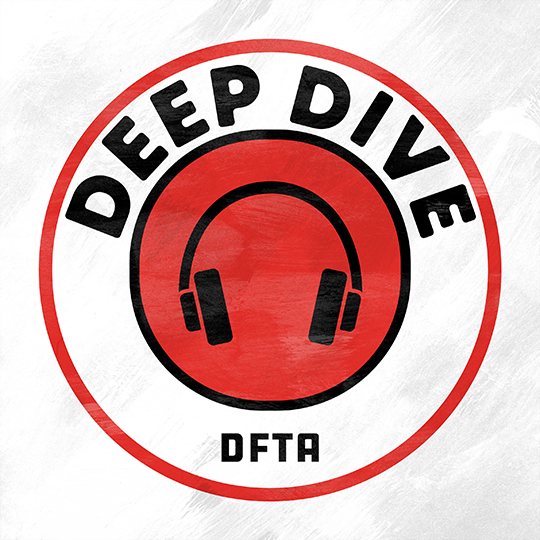 Don't Feed the Artists presents Deep Dive, a "sometimes" show featuring our takes on the discographies of musicians we love.

Deep Dive is included in the Don't Feed the Artists podcast feed.

This week we listened to the three studio albums by one of the best-selling artists of all time, who's influences include pop, R&B, funk, soul, reggae, hip hop, and rock.

A Beginner’s Guide to Black Metal

This week we start a journey into black metal as we listen to three albums that defined the genre.

We're continuin' our Journey into 2021 with our first Deep Dive coverin' a greatest hits release, inspired by Dave sharin' his love for playin' Don't Stop Believin'.

This week we listen to the band that helped introduce grunge to the world, Aberdeen, Washington's Nirvana.

This week we listened to Andrew W.K.'s debut album, which initially recieved a 0.6/10 rating from Pitchfork.

This week we listened to the three albums by David Bowie that became known as the Berlin Trilogy, which Bowie later referred to as his "DNA".

This week we listened to the four albums by one of the most influential artists of his generation, Pulitzer Prize winner Kendrick Lamar.

This week on the show, we talk about an album you probably already know all about, but we listened to it anyways.

In the latest Deep Dive, we take a look at Green Day's American Idiot in a feature-length episode, with a runtime of over twice the length of the album we're talking about.

Coming soon: A two-part Deep Dive into Metallica's first five albums: Kill 'Em All, Ride the Lightning, Master of Puppets, …And Justice for All, & Metallica.

This week on Deep Dive, we listen to Sufjan Stevens' Fifty States Project, including the records Michigan and Illinois, and Hagen has a game to play!

This week we're all back together for a Deep Dive into My Chemical Romance's discography full of concept albums, and Hagen has a game for us.

In our last episode of the year, we take a look at the four albums by Slowdive, the influential English shoegaze band.

With two episodes left in the year, Adam and Jackson are back to cover the five albums by Pavement, and their transformation that took place between them.

This week on Deep Dive, join Hagen and Dave for a drinking game during a truly deep two-hour dive into the career of Britney Spears.

This week Dave and Hagen are back with a Deep Dive on Paramore, including all of the band drama in the band's history, and two Paramore-specific segments that you can follow along at home.

This week on Deep Dive we listened to the American rock, proto-punk band The Stooges, with five albums spanning nearly 50 years.

This week Jackson decided we would listen to the Beastie Boys, who put out more albums than we thought at the time we picked them.

For this week's Deep Dive, we listened to the pair of albums from the highly influential band Joy Divison.

Here with our first listener-suggseted Deep Dive, we listened to the five albums of legendary British band The Police.

Adam and Jackson are back with all thirteen of Beck's albums in his first 30 years of his career.

On this week's Deep Dive, Hagen & Dave are back to cover Slipknot's discography and what nu metal is, before their upcoming sixth album releases next month.

Adam and Jackson took a bit of a break to let Dave and Hagen record the longest Deep Dive yet, covering the nine studio albums by Radiohead.

We've mentioned this band a few times already, so we decided to go ahead and listen to the three landmark albums by My Bloody Valentine, the quintessential shoegaze band.

Up next on Deep Dive, we listened to the four albums by influential desert rock band Kyuss.

This time on Deep Dive, we listened to the five albums that Australian psych rock band King Gizzard & the Lizard Wizard released in 2017.

This week, we listen to the first four albums by the Oxford-based rock band Foals, prior to the departure of their longtime basist, and the release of their new two-part album.

On this week's Deep Dive we listen the man hailed as the next Marvin Gaye, D'Angelo and his 3 albums over his 20 year career so far.

On this week's Deep Dive we check out the full discography of influential gothic rock band Bauhaus, including their first single and final "epilogue" album.

On this week's Deep Dive we check out the four albums by the El Paso band At the Drive-In.

Breaking with the Deep Dive format so far, we listen to 20 currently unreleased songs from The National, including two songs that will appear later this year on their upcoming album.

Continuing with another important band in Britpop history, we listened to the 7 studio albums of Oasis.

Don't Feed the Artists presents Deep Dive, a fortnightly show featuring our takes on the discographies of musicians we love.

In the second episode of our new show we look at the 6 studio albums of Modest Mouse, and how the bands output has changed over time.

Don't Feed the Artists presents Deep Dive, a new show featuring our takes on the discographies of musicians we love. In our pilot episode of Deep Dive we take a look at the first six years of the influential progressive rock band King Crimson.